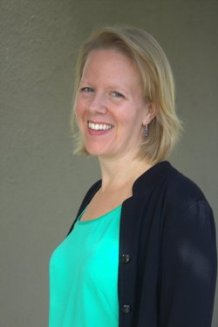 Today I’d like to welcome Rebecca McCray, YA fantasy author of The Journey of the Marked.

An epic series that’s a cross between gritty sci-fi and fantasy and focused on the message of valuing differences.

Having read your book, I know you do a really good job of writing for youth but also keeping things at a level that works for adults.  Is that something you do purposefully, and is it hard to accomplish?

My goal was definitely to write a book that appeals to a broader audience.  I’d say, though, that my writing style has as much to do with personal preference as anything.  I wanted to ensure the sixteen-year-old characters were realistic, so I tried to present their thoughts and antics in that light, of course keeping in mind that growing up during a time of war would mature them faster.  However, I wanted to write a story that was both entertaining and thought-provoking (e.g. includes more complex social issues).  I’d say it was that focus, along with just my natural writing style (not too simple, but not overly complex, and with some quirky subtle humor), that appeals to the variety of adult fans I have.

I can definitely see that style in your writing.  What are you working on currently?

I’m writing the last few chapters for The Training Camp, book two of my series.  Of course, editing will follow, but at least the finish line is near.  The Training Camp continues the story of marked youth from book one, The Journey of the Marked, as they are challenged and developed in preparation to join the warriors fighting to rid their planet of its self-appointed rulers.  While a substantial portion of the story takes place at the camp, there are still very real dangers and issues faced by many of the characters and I think readers will be most intrigued as some unique skills begin to surface.

I know I’m looking forward to seeing their training.  How many books do you have planned for the series?

This is a tricky question for me.  I’m currently planning five in total, but I’m not a fan of the 900 page books of late and my story is complex.  What I found as I was working on book two was that it was too complicated, too many storylines for just one book.  So, I ended up splitting it into two, which will run on concurrent timelines.  This allows me to help the reader keep track of the story, but also to better explore the various species, cultures, and characters.

Oh, interesting.  I wondered about the timeline and where book 2 would fit.  What is your favorite scene you’ve written?

Excellent timing for this question.  I just finished a chapter I’m inserting about a third of the way into The Training Camp.  At the end of the chapter, two of the main characters have a discussion about what drives them to fight.  I definitely need to flesh it out more, but the message is very strong and highlights at least one of the struggles of war.

Is this sequel darker than the first, do you think?

The subject matter for the series, as a whole, is relatively dark, but I intentionally kept book one light (and yes, even with the deaths and funeral, the overall story leans toward the lighter side).  As we transition into book two, the challenges increase and the story does become darker, but book two is a something of a step toward book three, which will be darker still.

Who inspires you to write?

The gaggle of characters swarming around in my head.  I’m always surprised when I see people glued to their phones on transit or while waiting for an appointment.  While I certainly check from time to time, my imagination is always creating scenes and characters when I’m idle.  It’s that constant creation that drives me to write.

Do they ever get so distracting that you forget your surroundings?  🙂

Haha.  Completely.  It’s especially bad when I’m walking somewhere familiar as I’m almost in a daze — easy to be hit by a car that way.  Of course, then there are the times I start working out something in my head and end up talking to myself.  Definitely see some odd looks from time to time.

LOL.  Do you use your personal experiences in your writing?

In my writing, I use personal beliefs that have developed through my experiences.  I love to travel and experience different places and cultures, meeting new people along the way.  Those experiences have shaped how I see the world and the interactions of people in it.  In turn, that has influenced my series.

Travel and sightseeing are invaluable to authors for world-building, I think.   As far as interactions with people, what kind of things do you take away and put in your writing?

Okay, interesting question.  I’ve never separated those experiences out and thought about it, but I think it’s more an awareness of how people react differently.  For example, a number of the species in my series use either handshakes or hugs, which would seem familiar to at least many people in the US.  However, not all cultures use those customarily and I’ve built a scene into book two where an individual from a species that doesn’t hug thinks about how awkward it is when someone hugs her.  I’ve seen countless real situations like that where someone politely does something out of respect for someone else despite it being uncomfortable.  With all that said, these little nuances are just that, so while you may occasionally notice something, I doubt many of the things like the above would stand out to most readers.

Thanks, Rebecca, for sharing!

One thought on “#AuThorsday with Rebecca McCray”