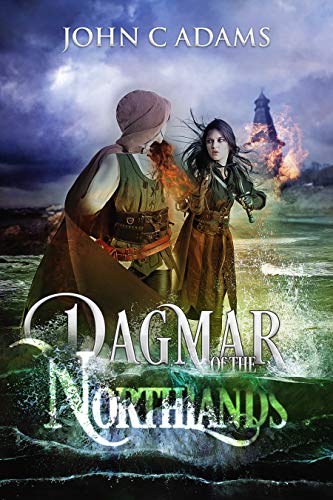 An epic-length book, this story is filled with fantastical lands, intriguing characters, and a complex history of kingdoms and gods. I really enjoyed the vivid imagery and excellent characterization of both the heroes and villains. The plot itself builds and draws you in as you begin to understand how everything might come together. The scenes where the gods are watching the events of man add a cool mystical element. The various tensions in various relationships also keep you interested.

I found the title and blurb a bit odd, considering Dagmar isn’t necessarily the main character. The overall story certainly doesn’t revolve around her by any means. She’s important and a dynamic character, but I thought it was a little strange that the title suggested her story line was the focus.

Also, there were a LOT of characters to keep track of. I like multiple points of view, especially in a book that covers this much ground, but I think there were something like 10+ POV characters. Eventually you figure it out, but it’s really confusing at first because the book jumps from one to another quickly before you’ve gotten to know anyone. I think any experienced reader can handle it, but it’s something to be aware of as you dive in. And along with this, there was a LOT of “son of” and “daughter of” and explanation of who had married who over generations – that might be great in moderation to give a historical depth to these kingdoms, but it was a LOT and added to the confusion from the get-go.

The writing itself is great. I was never distracted by any editorial goofs. There’s plenty of description to give you a picture of each scene without being overly flowery. The dialogue sounds natural and fits in well amid all the action. Also, the author does an excellent job of making you sympathize with each character, good or bad, and even the heroes are shown to have problems, which makes them believably human.