Dark.  Strange.  Adventurous. P erfect for fans of Alice in Wonderland, The Wizard of Oz, Neil Gaiman, and all things supernatural.  If you love magic, wizards, oddities, teen fantasy, mythology, supernatural creatures, young adult dark fantasy, and other realms, then the world of THE STRANGE LUCK SERIES awaits you!

I love when the “fans of” list clearly sets the tone and feel of the story.  Are these elements things that you look for as a reader as well?  What are some favorite books in your genre?

Thanks.  I tend to look at the description first, but if I’m still not sure about the book I’ll check out the “fans of” component.  I included titles/authors in my description because people have told me that my books are similar to those.

I love anything by H.P Lovecraft and Neil Gaiman.  I’m really into gothic horror literature right now and have been reading authors who influenced Lovecraft.

I’m a Lovecraft fan too.  What are you working on currently?

I’m finishing up the final edits for the third (and last book) in the Strange Luck Series—A Darling Secret.  All the books in this YA Fantasy series center around a specific theme. Strange Luck (Book I) focused on the value of memories and identity.  The Nightmare Birds (Book II) focused on fear.  And, A Darling Secret (Book III) will focuses on inner strength.  A Darling Secret will be released fall 2017.  I can’t wait for the series to finally be complete!

Congratulations on nearly being finished!  Did you always plan to focus each book on a specific theme, or was that something that developed as you went along? Are those particular themes important to you?

I didn’t plan it.  The themes developed as I wrote.  When I write I don’t plot everything out.  I have a very general idea of what I’m going to do and the rest I come up with as I go.  For example, I wanted to write a book about a world built using stolen memories.  That was the general idea I had for Strange Luck.  The rest took form as I wrote.  A lot of the time I don’t even know what is going to happen in the story or to my characters, but that’s part of the fun.

All the themes I discuss in my books are important to me and are largely based on my own experiences/thoughts, like how we are our memories.

I’m a plotter myself, but your approach sounds like a fun way to create.  When you get stuck in your writing, how do you make yourself keep going?

It sounds counter-intuitive, but I take a break from writing.  I’ll go for a walk, hit an aerobics class, paint.  Whatever it takes so that I feel recharged and can look at my work with a fresh eye.  Sometimes it might take a few hours.  Other times it might be a few weeks.

More often than not, I’ll get a flood of ideas.  This is why I always have a notebook with me or my cell phone, where I can take verbal notes.  I also get inspired by reading.  I’ll be sitting there half paying attention to the story I’m reading and then suddenly, an idea will come.  All my paper bookmarks are covered in notes.  Lol.

Ha!  That’s a great idea for bookmarks.  Do you use your personal experiences in your writing?

Definitely!  Since I’ve always been an outdoorsy girl, I found it easy for my protagonist to be one too.  Daisy’s a bit of a tomboy who loves hiking and camping.  The trails she hikes and places she goes are based on some of my favorite real-life places in California (where I grew up).  Almost all my characters are inspired by people I know.  Even some of my old pets I had growing up!  There’s a lot of other secret things I throw in too, like how my experience as an aerial acrobat influenced writing The Nightmare Birds, which is centered around a dark circus.

If you are curious about more secrets behind my books, check these out:

10 Things You Didn’t Know About The Nightmare Birds

Aerial Acrobat?!  That’s definitely a unique experience to draw ideas from!  When real-life people inspire you to create characters, do you ever tell the real people?  And do you ever encounter random people with quirks you use in your characters?

Yes, I do tell certain people that a character was inspired by them.  They always get a kick out of it.  And yes, I do encounter random people with funny quirks that I’ll implement into my stories.  An example of both is Christine (the German aerial acrobat) from The Nightmare Birds.  In real-life Christine was a German foreign exchange who stayed with me and my family in high school for a semester.  She was obsessed with the color orange. Everything she owned was orange and she only ate orange food.  She also had really long brown hair, which she always chewed on like a beaver.  You’d be standing there talking to her and she would start chewing on her hair like it was a meal.  I always thought both of those quirks about her were funny, so I used them in the story.

That is funny.  Is there anything you’ve read that made you jealous you didn’t think of it first?

Probably Harry Potter.  It’s one of my favorite series of all time, but I think J.K. Rowling is more than deserving, especially after all that she has been through.  She’s truly an inspiration and a remarkable person.

Many authors seem to feel that way about Harry Potter and Rowling.  Why do you think her stories make SUCH an impact on not only readers, but authors in particular?

J.K. Rowling effortlessly invites you into her magical world, which leaves a delightfully whimsical lasting impression on any child or adult.  I think it’s impactful on authors because the story resonates across multiple genres.

Thanks, Amie, for sharing! 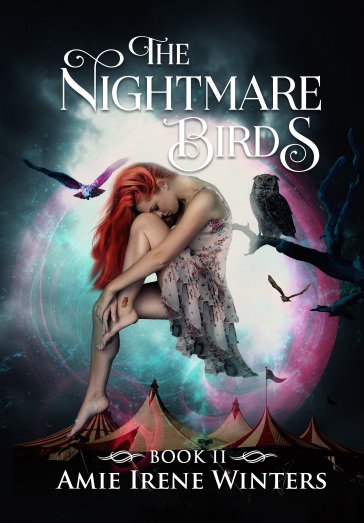