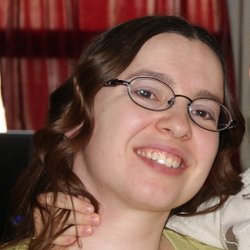 My series is about vampires, demons, mages, werewolves, and humans all living in peaceful co-existence, except some people soon learn that not everything is as peaceful as they assumed.  Werewolves hunting humans, demons sneaking onto Earth, humans experimenting on the different races, and so much more.

Lots of dark supernatural fantasy, it sounds like.  What do you like about writing in that world?

I like that anything goes.  I can delve deeper into the darker side of emotions without making the character a sociopath.  Plus it lets my imagination run wild.  I have mages who can cast magic and while I do have rules, it almost creates limitless possibilities.

What are you working on currently?

I’m working on the fourth book in my Enforcers and Coterie Series. It’s about Victor, an Enforcer, who is searching for Isabella, a human who’d been abducted and experimented on.  Isabella, however, would rather avoid Victor since her assignment is to kill him, which she doesn’t want to do.

How many books do you have planned for your series?  Does each book focus on different characters?

I have five novels and five novellas planned for this series.  And yes, each book focuses on different characters.  In the first book, it’s Jackson and Julia, although you meet a few of the characters that will appear in the next books.  Each subsequent book introduces more characters.  Not everyone gets a story though.

However, I’ve fallen in love with this world and the thought of leaving it completely pained me.  So I decided that even though this series will end soon, that doesn’t mean I have to move on.  I have a spin off series planned which will also be five books, focusing on Markus.  Instead of paranormal romance, it will be an urban fantasy series.

It’s hard to let a world go – I completely understand that problem!  What is your favorite scene you’ve written?  Can you give us a peek?

I have a massive soft spot for Markus and Elijah, two powerful mages who’ve been friends for a few hundred years. They have an interesting friendship.  Here’s a snippet:

Markus chuckled, breaking some of the tension. “Maybe I should leave you two alone. Looks like I’m the third wheel here, and I’ve never been one for threesomes or voyeurism.”

“You and Sarah, both,” Dawn sighed, tightening her hand on Elijah’s inner thigh, fingertips brushing against his hardening cock. “She’s such a prude.”

Elijah coughed, surprised by her words. “What?”

Amusement danced in her golden eyes. “I’ve lived a long time. You telling me you never experimented?”

“Hmm, do tell, Elijah,” Markus drawled, his enjoyment of Elijah’s discomfort evident. Faint horror then washed over his face. “No wait, don’t tell. Some things should never be said among friends. Your sexual history is one of them.”

A sadistic smile tugged at Elijah’s lips. Ah, the temptation to continue this conversation, even if it meant his own embarrassment, simply to see Markus squirm.

Hahaha!  I like your play with dialogue.  I’m assuming you know your characters really well.  Do you find it easy to slip into their heads and write their conversations?

Sometimes it’s quite easy for me to know what they would say and how they would react, almost like I’m listening in on their conversation.  Other times, it’s like pulling teeth.  In those instances, I have to re-read what I’ve written since in most cases, it’s out of character for them.  And after several books with them, their voices now come out loud and clear.

An editor is great, but make sure you are compatible.  I published my first book without an editor and I still shudder in horror.  Some people are probably decent at self-editing.  Myself, I am not.  I have no hesitation with admitting that.  I lucked out with the editor I have now.  She has a snarky sense of humour, praises me, and rips my work apart.  It’s incredibly satisfying to work through her notes and realize that my story will be way better thanks to her help.

So find an editor you feel comfortable with, understands your genre, and learn from them.

That’s great advice.  I think a lot of authors are terrified to hand over their work.  Have you had to learn to get better at accepting constructive criticism?  Or did you trust your editor right away?

When I first received my work back from my editor, Lizz at Razor-Sharp Editing, I almost cried.  It was covered in red marks.  Huge chunks of written word slashed through and comments all over.  Then, I sucked it up, read her notes, and went, “Huh, she has a good point.”  And I realized that my work will be a heck of a lot better with the changes she suggested.

When Lizz made a comment about how one character wouldn’t speak a certain and it sounded like how another character would talk, I wanted to hug her.  She understood them and had paid attention.  That, more than anything, made me trust her.

That’s great.  When you get stuck in your writing, how do you make yourself keep going?

I talk with two of my author friends, Jen Winters and Heather R. Blair.  When I feel like I can’t figure out a way around a plot point, or I’m just feeling blah with writing, they listen, give some advice, and then threaten me if I don’t keep writing. 😉

Sometimes, though, I need to spend a little time either reading or working on a different story.  If I need to get that specific story done, I grab some paper and a pen and just start writing.  I’ve found that the words will flow, even if they suck, when I ignore my computer for a while.

It’s great you have author friends who “get” what you go through in this process.  How did you meet?  Also, interesting that changing the method of writing gives you a kick start.  When did you first realize that worked for you?

I met them through Goodreads in a group called Read Romance, Write Romance.  I have to admit, I started stalking Heather after I read her books.  I feel in love with her writing style.  We started talking through FB and now we chat almost daily.  Jen, I’d sent her an email after reading her first book because I wanted to discuss her book.  We hit it off almost immediately, and there’s rarely a day that doesn’t go by where we’re not talking.  In fact, her daughter now plays online games with my son.

As for changing my habits with writing, I started a new job a few months ago and don’t have access to a computer for my writing.  I figured why just do it longhand on my lunch and then type it up later.  Even better, I’d been stuck on a scene and couldn’t figure out a way past it.  Once the pen touched paper, it was like the floodgates opened.  Now it’s my go-to for when I’m stuck.  I open up my notebook and just let my mind take over.

Thanks, Veronica, for sharing!