This is one of the first anthologies of short stories I’ve read, ever.  I think I’m going to read more of them from now on, because this was a great way to sample what different authors had to offer.  I’d heard many of these authors’ names before but didn’t really know what they wrote, and now I know.  Some I will dash right out to buy everything they write…others I’ll skip over.

Overall, this light anthology was a nice collection of happy or nice stories – nothing too rough, nothing too PG-13.  Some stories I was familiar with because I’ve read the bigger books they’re matched with, such as “Beginnings – Protectors of the Elemental Magic” or “A Neophyte’s Tale” or “The Dreaded Birthday.”  Other authors/stories were completely new to me that I absolutely LOVED, like “Queen of the Small Seas” and “The Bridge” and “Eternal Arguments.”

There were a few, however, that felt a little amateurish in either their writing or storytelling.  Some felt rushed, which is understandable because finding the tempo for a short story is quite difficult.  One or two I couldn’t even finish because the writing and/or characters and/or plot were just not as good as I would have hoped.

I won’t point out which ones let me down, though, because overall this collection is great and worth a read, and I’m sure some people would enjoy even the ones I didn’t. 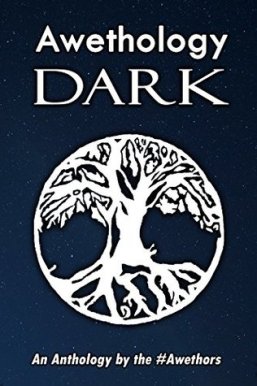 If there was a competition between Awethology Light and Awethology Dark, I’d definitely have to cast my vote for Dark.  Almost every single story in this collection was incredibly well done, interesting, unique, and held my attention.   The material itself is definitely PG-13 because of language, violence, adult situations, and horror elements.  A few were heartfelt stories that were quite sad.  But, man, were some of these funny too.   And I was delighted to find beautiful writing in even the most horror-filled stories — who’d have thought?

My favorites here would have to be “Pennies from Heaven” and “The Lost Sheperd – A Short Reacher Story” (which made me want to read more of this author’s world immediately) and “April Showers” and so many more, but I’m forcing myself to stop at naming three…  Okay, and “Winter Palace” and “Down by the River.”

There were a few that I wasn’t super crazy about, but I DID finish reading them, so they held my attention at least that much.  Honestly, I was very impressed by the writing of almost every single story.  The formatting between stories is a bit wonky at times (same for Awethology Light), but not enough to cause confusion.

Overall, I cannot recommend this collection enough if you’re looking to branch out and find new authors to read.