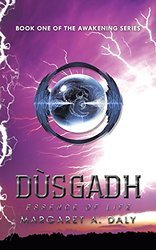 I read this story (about the length of a novella) in one long sitting, and it’s definitely packed full of interesting ideas, action, and mystery so that you keep turning the pages.  The overall concept involves a mix of Celtic folklore, magic, and New Age-ish reincarnation that’s pretty interesting.  I really like that this fantastical mystery unfolds bit by bit until you get the full picture of what’s going on, and you learn from inside the main character’s head as she too figures out what’s happening to her.

Ember herself is a likable-enough character to root for.  Her sister Becky is a little flat but a good authority figure.  The bad guy is appropriately evil and creepy.  Matt and Izzy were easily my favorite characters, and their story involves a really cool twist that made them that much more interesting.  (Honestly, I would happily have read THEIR story more than Ember’s.)

However, there were several glitches in the book that kept me from really, really enjoying this story. It often felt like the author knew what she wanted to say but didn’t convey it very clearly – especially when different planes of consciousness were used. The timeline moves really fast and doesn’t dwell enough on some important parts, for example transitioning way too fast into the climactic fight at the end. It feels very jumpy. Ember’s sudden flare-ups of rage are also really weird – aimed at everyone from her sister to the love of her life/lives. And, even though Ember and the reader both think she’s an adult, it suddenly turns out that she was 16 when she “died,” which adds a lot of confusion about the love interest aspect of the story and about how old she’s ever been in general when all these memories resurface. Mostly, a lot of things just felt rushed.

As for the writing itself, the book is relatively typo-free, which is nice and helps you read without getting hung up on goofs. The language used feels comfortably YA or NA, not too difficult, and accessible for all readers.

Give it a try if you like mystical, kind of scary, kind of romantic fantasies with a girl at the center.