Once upon a time, a man and his two friends decided to go for a fishing trip off the coast of Northern England.  They got caught in the Trade Winds, drifted across the Atlantic, and ended up in America.  If you ask me, that is the perfect story for how my mom’s side of the family ended up in this country.  It just fits – a fishing trip gone wrong is the reason we’re here.

Here’s my basic belief about the Gummer side of my family: We’re bonded not only by blood and close proximity (most of us have lived somewhere along the 2-mile “Gummer Lane” at some point in our lives), but also by the shared knowledge that we are a weird bunch of people who will always love each other out of empathy if nothing else.

Grandpa Bud – One of my earliest memories involves a Christmas tree, a cathedral ceiling, and a chainsaw.  We had just moved into our new house, which seemed enormous and lofty to my little self.  Grandma Marie and Grandpa Bud had come down to Cedar Springs to help us pick out a tree, and we’d come home with a doozy that would later be christened “Oh, Hideous Tree, Oh, Hideous Tree, how blue-green are thy branches.” The only problem was that the tree was about a foot too tall for our ceiling.  My grandfather, being a master of creative solutions, brought in a chainsaw – yes, into the house.  It would have been a brilliant idea, except that sawdust shot across our living room.  The burning smell set off the smoke alarm.  Our dog, named Kat by my self-amused parents, started howling.  We all tried to cover our ears as we coughed and sputtered through the smoke and flying chunks of Christmas tree.  Grandma, not to be outdone by either the dog or blaring smoke alarm, started screaming at my grandfather.  Now, it is saying something when I tell you that the noise was so deafening that I couldn’t even hear my grandmother.  But I could see her lips – fortunately I was too young to read them.  I also saw my father, who was trying desperately not to laugh.  My mom just stood there, looking embarrassed and helpless, which was always the reaction she had in situations like this.  Eventually the tree was cut down to size, and then Grandma did the same to Grandpa.  We enjoyed the Hideous Tree, but that Christmas we spent most of our time picking sawdust out of the rug.

Other adventures of Grandpa Bud:

Mostly, Grandpa Bud was a good guy. At his funeral, over 500 people came – all were close friends or family. As Dave Riley, pastor and near family member, said, “Bud liked to have a good time,” and he tried hard to make other people have a good time. I get more from Grandpa Bud than I would probably like to admit – we both don’t like being told what to do, we both poke at people too far, we both think we know what is best for other people, we both love bread.

Grandma Marie – I, if anyone, have the right to pick on her because I bear her name as my middle name and somehow fate found it suitable that I bear many of her traits as well.  Therefore, I poke in love because many of her idiosyncrasies are mine too.  I am not the only one to inherit her shrill voice, but I confess that I mimic it better than anyone – I could even get her dogs to obey me when I used shriller tones.  My college roommate once went to a ballgame with my family and asked, “Do you think you can get your Grandma to do the voice?” I blinked at her and replied, “It’s not something you have to ask her to do.  Wait.  It will come.”

In all truth, I love Gma Marie and am ridiculously proud to be named after her.  She’s a feisty, strong, God-fearing, sports-loving woman who passed down to the rest of us women at least some of her ability to cook and certainly her inability to sew.

Uncle Bob– Uncle Bob moved away to Wisconsin with his family, and I’m sure this has something to do with trying to outrun the crazy.  But, you can’t entirely run from genetics.  And I’m pretty sure he’s secretly attracted to the crazy, because my Aunt Pam fits in a little too well in our family.

Aunt Penny– Aunt Penny is a wonderful person and I love her dearly, but she has been affectionately deemed our Crazy Aunt.  A missionary from church inadvertently delighted us all one Sunday by telling us that in…whatever confusing language they spoke where he was a missionary, “bah” meant “ant” and “ba” meant “crazy.”  I turned around to Aunt Penny with more joy than I usually felt in church as a teenager, and everyone laughed at our secret joke.  Thus, “Bah-Ba” became her nickname.  (The best part is that she laughs along and doesn’t deny it. The trouble is when we haven’t told other people this and she introduces herself to our friends by saying, “Hi, I’m Sunny’s Aunt Penny.  Whatever Sunny has told you, I’m not crazy.”)

Other adventures of Aunt Penny: 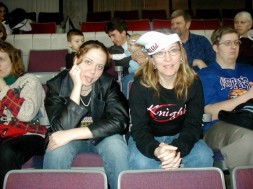 Paula – My mom has been known to pull a whopper every now and then too.

Really, though, I have a great mom.  She embodies all of the good qualities of the Gummer side – loving, caring, compassionate, easy-going, etc. etc.  My mom always, always finds the good side of people.  It was annoying as a teenager when I would be griping about someone and she would stick up for them, but she taught me to try to find something of quality in everyone.  And her eternal patience with us more Somerville types taught me that sometimes you can sit back and stay out of arguments.

Are we younger generations immune from the Gummer oddities? Signs point to NO.  Apparently a random friend of our grandmother’s once looked at my cousin Stefanie and said, “Oh, you’re a Gummer for sure!” Stefanie told me this later in an appropriately horrified tone.  I suggested that she should have touched her face nervously and asked, “Oh? Is the crazy showing?”  But, to sum-up and make ourselves feel better, here are only a few stories:

What of future generations? Will the craziness grow? It seems to be on a healthy start.

So that about sums it up for a tracking, generation-by-generation account of the Gummer craziness.  Janeane Garofallo said in some movie that this is “the genetic betrayal that is my heritage.” Don’t get me wrong; J’adore ma famille.  They just scare me sometimes.  We are an odd bunch, as I think all families must be.  But does your grandmother tell complete strangers that she hopes the neighbors die soon so that we can buy their land?

Still, it is my belief that we’re most bothered by our family’s flaws because we know they can be our own.  On the flipside, shouldn’t the same be true of our family’s strengths – shouldn’t we see them as our strengths? I have learned a lot from my Gummer family about generosity, selflessness, kindness, and all around love.  The Gummers are easily content, easily loving, and open.  They are down to earth and connected.  They humbly serve in a small community.  I’m not sure I could return to live on “Gummer Lane” as my mother and Aunt Penny did, but I appreciate the idea far more than I did when I was a teenager hungry with the adolescent desire for change and adventure.