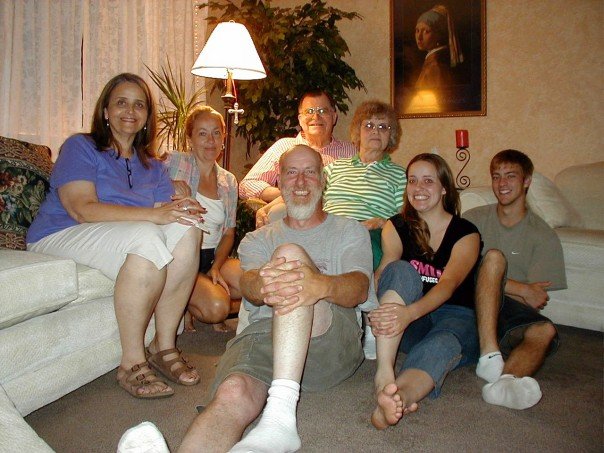 My family is very good at self-mockery – both sides, but today I’ll focus on my dad’s side.  “Bad gene thing” is a long-running joke, but all our quirks (genetic and otherwise) are loved, as they unite our little branch of the Somerville clan.

The Somerville family has instilled in me things I appreciate deeply.  It is from Dad’s side that my brother and I get our intellectual bent.  It’s from here that we love learning, science, literature, debate, wit, puns (oh, the puns), etc. Our grandparents, while not completely understanding the cultural generation we came from, always treated us with what I can only call respect.  They never talked down to us, and they took what we had to say about various issues seriously – I cannot begin to explain how this strengthened my adolescent confidence. My faith comes from all over the place, but the fundamentals I am grounded to come from what I gleaned from Grandpa Lloyd and Grandma Judy – this is a good legacy.  I know that my love for literature stems from the books on tape my Aunt Sharon  (my dad’s only sibling) read for us, and we listened to Secret Garden, The Chronicles of Narnia, and Charlie and the Great Glass Elevator so often that we wore out the tapes.  And, the Somerville side has always talked about “Irish this” and “Scottish that” so that through family I feel like a part of something stretching back into history – a something full of outlaws, circus owners, poets, Celts, hymn writers, and dragon slayers.

(Sidenote: An early Somerville family shield holds a picture of a dragon on a cart with flames coming out both ends.  The story is that an early Somerville gained lands by slaying the last “Wurm” by rigging a cart with a spear that gored a dragon through the mouth and out the other end.  Classy.  Another Lord Somerville instituted the custom of giving a side of bacon to house guests – loving bacon as I do, I like this connection.  Of course, then there was the much more future Lord Somerville who partied away all the family wealth.  This also seems to fit.)

It was difficult as kids to watch what we said around our conservative Somerville grandparents.  One time I blurted out how I had won at euchre the night before, and I remember my dad stiffening — as part of the “filthy five,” card playing was not encouraged.  (I should have known better because of the story of how my dad as a kid had been punished for watching “Mary Poppins” – this was his first movie, his second later being “The Godfather,” which I always thought was a hilarious contrast.) My dad was always more subdued around my grandparents; we were always scolded about little things that in our own home would have been fine.  I remember, as a kid, knowing that this was a way of showing respect to my grandparents.  But, I also thought that we were hiding who we really were from them, and I never liked it.  It felt like a lie, even if we were doing it to make them more comfortable.

At Grandpa Lloyd’s 80th birthday celebration, something changed.  I think we had the first real, open, free discussion.  It started with what in years past would have been avoided subjects – war, civil responsibility, and our relatively liberal stances. For some reason, we just started blurting our real thoughts.  I don’t know why the wall fell, but it did.  Aunt Sharon even went so far as to say to Grandpa, “You’re the only Baptist in the room.  We’re liberated Baptists,” which years ago would have been sacrilege.  Christian and I, as always, were listened to with equal standing, but we argued too, which took this whole experiment a step farther.  As unusual as this all was, Grandpa took it all with less confusion/disturbance than I would have thought.  He of course went on a preacher-ly detour into the nature of grace, but we jumped back in at times – definitely a new turn – and somehow managed to remain in the conversation.  It was…beautiful.

The Somerville side of my family is not exactly stuffy or devoid of fun.  My great-uncle Alden once said with a twinkle in his eye that our ancestors traveled “one step ahead of the posse,” and I quite believe it.  Alden also once said, “If I’ve done anything in my life to be sorry for, I’m glad.” I love these witty people on this side of my family.  Also, we are supposedly related to both Emily Dickinson and P.T.  Barnum, and Aunt Sharon has pointed out that this is the perfect description of the poles of our family – we’re poets and circus freaks all rolled into one. We take little seriously.  Even at Grandpa Lloyd’s funeral, when the fire alarm went off because of the caterers in the kitchen, we started laughing, which eased the “oh, no” looks of the guests immediately.

My aunt Sharon is definitely in the running for the quirkiest person of the Somerville family, and I’m pretty sure I grew up hero-worshipping her a bit for her love of stories, eclecticism, and all around verve.  My devotion may also have been based on the fact that I look like a mix between my Aunt Sharon and my mom – people have often seen my mom, aunt, and me together and assumed that Sharon was my mom’s sister instead of my father’s.  I have the Somerville dark eyebrows that are darker than my hair, and so does my aunt.  Dad commented once to Aunt Sharon and I that our shared appearance was simply a “bad gene thing,” but I think the comment rose out of childhood bitterness from when my aunt used to tease him that he was adopted because he looked nothing like either of their parents.

I love listening to stories from when Aunt Sharon and my dad were kids.  I’ve probably heard the stories a hundred times – knowing Dad – but I like the nostalgia.  The stories show that my brother and I are merely continuing the pattern of Somerville siblings with overactive imaginations.  For instance, I like the one about how my aunt used to sing in their front yard when cars drove by because she read a story about a famous opera singer who’d been discovered at the age of eight by a famous opera singer who’d driven by her yard and took the little girl in as her prodigy.  Then there are the many stories of how Aunt Sharon used to torture Dad, like when she left teeth marks in his arm and, when accused, denied biting him.  That takes a fun mix of guts and stupidity, and I applaud her for it.

As for my father, Dad doesn’t take anything too seriously, and I definitely have inherited this approach to life from him.  I fully admit to being a Daddy’s girl when I was little, and apparently this started very, very early.  When I was 5ish months old, Dad allowed me to be a part of the best April Fool’s Day prank ever.  While changing my diaper, he knew my mom was listening from the other room as he rattled off “This little piggy went to market.  This little piggy stayed home.  This little piggy had roast beef…” dramatic pause… “Paula, Sunshine has 6 toes!” My mom came running.

Other examples of my dad being a nut:

Dad’s ability to find and make humor in life definitely affected my childhood, and I learned from his example not to take myself too seriously.  Dad taught Christian and me a lot by example, probably more than he realizes.  We were taught Biblical Truth and right and wrong and each received our fair share of spankings, but along with that we saw from his example that a godly, loving father wants only what is best for us.  Even Dad’s OCD-like interest in numbers and science showed us that God has created a world that is fascinating.  He showed us that we could be creative and funny and weird and still be smart, confident, fairly well-adjusted people.  Growing up around my friends’ parents, I always, always felt grateful for my father in comparison.  My dad showed interest in us, what we cared about, what we thought about, and who we were turning into as people. Dad treated us like we were capable of making right decisions on our own rather than browbeating us.  Honestly, I feel a little gypped because I never had anything to rebel against.  Dad has taught me many valuable life lessons, even if only from stories of his own poor choices in earlier life (these would be the 1970s, or his “herbal period”).  I have been spared from making many mistakes in my own life because I heard what the consequences were like for him and I had no desire to go there for myself.  I will forever be grateful for how Dad nurtured us and allowed us the freedom to think for ourselves.  Dad was and is our friend.

Looking at everything, I don’t apologize for saying that my mom’s Gummer side has had more impact on my daily life because it is true, but I don’t want to forget the Somervilles at all.  While my mom’s larger family has more of an apparent influence in my life, I do deeply appreciate the Somerville side because its depth, passion, and faith balance out the Gummer…well, craziness.  But more on that later.